A week in the life of Spandex 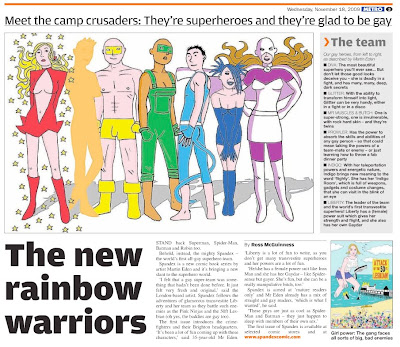 Fascinating story, Mart. Glad you feel you're getting on top of things after a mad week. Just shows to go you, you were right to put aside O-Men for a while to make Spandex happen. Good luck with it.

Hey, dunno if you know Mart, but Spandex got a mention in the Guardian at the weekend! In their Guide supplement (a listings thing) they do a 'Populist' column (basically a hot list rundown of the week) and it says 'Superheroes of the Week: Spandex, a new comic features the word's first all-gay superhero troupe including Mr Mucles and Butch plus enemies like the Pink Ninjas'. If you haven't seen it I'll bring it in. Here's a link to the online version: http://www.guardian.co.uk/culture/2009/nov/21/populist-30-rock-tina-fey

Hi Mart!
Yeah, Neil E texted me while I was up in Leeds at a comic con yesterday - I ran out and bought a copy hehe!

Im from Brazil, and the news about Spandex also got in here among gay website news and also thru independent comic artists in my country!

Man you are all over the world with our Spandex comics, and I hope you make a Spandex #2 ASAP, because it is a hit !!!

Thank you so much Bruno! I am pretty sure I will do issue two with the Pink Ninjas!
And then issue three, with gay zombies hehehe!
Lots of fun to come!

Upload your comics to Ka-Blam at least, then list them on their sister site, Indyplanet. It's print-on-demand, plus the postage is taken care of. Very useful for US and overseas orders especially as it's based in America. Just set your profit margin and you're off.

Shame CI isn't around anymore. I get lost as to what's around these days. Grant's Pest Control especially.

Thanks Chris - I will investigate!

"including Bleeding Cool, where Rich Johnston posts a sarcastic, scathing feature on Spandex"

I did nothing of the sort. I did run a sracastic scathing feature on lazy journalists though ... including the one at the Sun i passed the original story on to! 8-)

Yes you did, Rich - you were dismissive of most of my characters in that first column. That is my opinion and that is the opinion of my friends. I haven't read anything on your site since, just heard stuff from my friends. I offered to send you a copy so you could read it for yourself, but you didn't respond.
Maybe some journalists can be lazy, but c'mon, all the people who are throwing gay superteam names at me - would it surprise me if they hit the Google button or Amazon button? No it would not.

"you were dismissive of most of my characters in that first column."

No, I was dismissive of a couple of the characters names - James Bend, The Man With The Golden Bum sounded like something out of Russ Abbot. But the rest I wasn't dismissive of at all. And even that was tongue in cheek, hence the "did Sid James die in the Stonewall riots for nothing" reference.

I don't rememer getting an offer of the comic, but I'd read it by then.

You also said "I hear Rich Johnston is getting worse on his website, but I don’t bother looking - I just don’t want to know. Doesn’t the guy realise that this is good exposure for comics? I’m getting people buying my comic -"

What has that got to do with anything I've written. I did run a piece looking at how newspapers have run many "first gay superhero" headlines over the last twenty years, often the same papers, sometimes only months between said headlines. But that was just about journos, not about Spandex.

I congratulate you on all the press you've received, it can only be a good, thing and you've but together a very fun comic. And I've been reading the O Men for, well it feels about fifteen years... so it's well deserved.

Thank you, that is nice of you to compliment Spandex and O Men. Shake hands?

My hand is very shakey, how did you know?