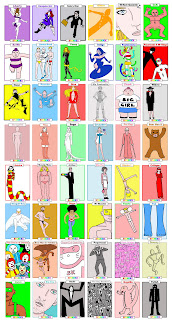 In case you haven't seen 'em, here are the Spandex trading cards! I'm giving one away free with every copy of Spandex 5 - which is on sale on Saturday 29 Oct, launching at the MCM Expo! I'm also giving away a free J-Team mini-manga comic with the issue.
There are 64 trading cards in all, but I'm only showing 48 cards here, for spoilery reasons.
Posted by Mart at 3:55 AM 2 comments: 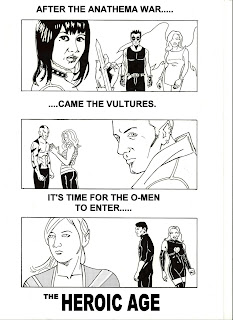 Ooh, Stephen Newbold did this lovely O Men pic on his blog! Very cool!
Posted by Mart at 3:53 AM 1 comment: 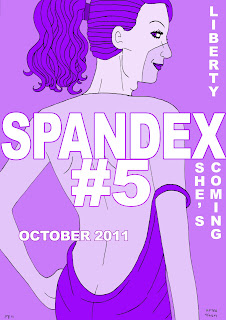 Hey guess what guys – I’ve just sent Spandex 5 to the printers (for a proof copy, I’ll print a couple of weeks later).
Normally, I aim to get an issue done for the Thought Bubble convention in late November, so I’m dead early!! And thank god for that, because every issue seems to get delivered on the day I need to get my train to the con, and it’s always right down to the wire!
It’s so weird, maybe I’m getting quicker – I’ve actually been going out socialising more, so I’m surprised I got it done so quickly (especially as the issue features about 80 characters).
One thing that helped was making my own font. Normally I hand-letter, scan and then do major tidying-up, but it was proving time-consuming, so I tried a different method. The font took me a couple of months to make, and I’m under no illusion that it’s perfect – I think the jury will be out... But hopefully it just about does the job and I will be making tweaks on it for issue 6.
So anyway, issue 5 is all about Liberty and we get to learn her origin, and we follow her as she investigates what happened to her team-mates in issue 4. She ends up fighting just about every villain in the Spandex universe, plus gets a bit of help from some of the good guys too (that was so exciting to do). I think it’s a fun way of exploring the universe, and a slight homage (/piss-take?) of comic crossovers. Will Liberty find out where the team are... And will there be a shock ending...? My lips are sealed lol...
I think, after the shocks of issue 4, people will find this one a bit different. Generally it’s a bit lighter in tone, with a bit of a dark subtext, and the shocks are more story-related instead of issue 4’s out-and-out shockers. For me, though, it’s all about experimenting, and if you don’t like this issue, just stay tuned for issue 6, which will turn everything on its head (and it’s pretty much what the series has been leading up to).
I’m not going to do an official announcement of the issue just yet, as I’m still working on my little free ‘extras’ that come with the issue - I’m making a manga style J-Team mini-comic and 70+ mini-trading cards. The manga story, to be honest, is just me experimenting and having fun and seeing if I can do it (ie, tell a story in Japanese comic style, which is the reverse of how we do it), and hopefully the trading cards are just nice and attractive.
I've popped a rejected cover for this issue up above (it was based on a James Bond novel book, but I felt it was too much of a rip-off!)
Anyway, please stay tuned!
(Oh, and I’ve already started drawing issue 6 – I’ve made a start on about 10 pages woo hoo!)
Posted by Mart at 9:20 AM 1 comment: 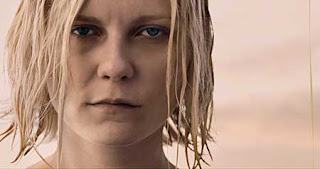 I saw this movie on Sunday. I can’t believe Empire gave it 5 out of 5!!!
Maybe it’s just one of those movies you need to be in the right mood to watch.
I could sum the movie up fairly quickly – in fact I’ll do it now, obviously spoilers ahead:
Kirsten Dunst gets married but throws a wobbler and ruins it all, then a blue planet is heading towards Earth, but then it seems to go away again, but no then it comes back!, Charlotte Rampling throws a big wobbler and rides around on golf cart, then Kirsten Dunst gets naked, Kiefer Sutherland wimps out and kills himself in a horse stable, and well, I won’t spoil the ending, but the arty end-scenes they showed at the start of the movie were better.

Okay, no more spoilers from here.
I think what this movie was trying to do was quite clever – Kirsten’s character couldn’t handle her life, but then when the planet was heading towards catastrophe she was fine – unlike her more level-headed sister who lost the plot. But did it really need two hours to say this? Two very drawn-out hours?
And the science seemed really dodgy. There was a planet hiding behind the Sun? Really? Wouldn’t a planet heading towards Earth have more of an impact – wouldn’t the sea go crazy? Even I know that, and I’m not a scientist.

Still, it was very ‘brave’ of Kirsten to go naked, and she does have large bosoms. I was shocked to see her full-nude scene in the trailer... And I’m sure you ‘saw more’ in the actual film...
Posted by Mart at 9:17 AM No comments: