Sometimes i get really annoyed reading comics. Just the sheer incompetence of it all.
Two comics have riled me recently.
First of all there is the Great Ten. These seemed like really cool creations in 52, but what a clusterfuck of a series. So badly drawn, so over-written - just abysmal. (The Japanese heroes Final Crisis spin-off comic was just as bad. Non-sensical!).
And then there's Titans. What happened to this once great title? There isn't even a reason for them to be around any more (it's all about the Teen Titans - but that team is woefully bad at the moment). And why does Starfire wear such an outrageous costume? And aren't they all heading over to JLA (where Mark Bagley seems to have forgotten how to draw, and can't quite keep Donna Troy's cleaveage consistent.)?(And when will Donna Troy get a superhero name?)
But the latest issue is pure shit (the one with Starfire and Cyborg on the cover). Sloppy hack-y artwork (almost but not quite nearing the badness of Tom Denerick)... And we have the sympathetic tale of Phobia, a villainess with a strange, curly vagina. We actually feel a bit sorry for her as she relates her back-story...and then Starfire wakes up and beats her to a pulp leaving her quivering and bleeding and begging on the floor. Wow. Nice.
Crap!
Comics, sort yourselves out!
Moan moan moan...
Posted by Mart at 4:05 AM 4 comments: 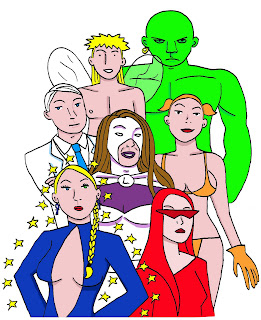 I've been working on this little piccie... They'll appear in an upcoming issue of Spandex and they make a tiny cameo in issue two... It's an earlier incarnation of Spandex from the 80s:
From bottom to top...
Critique (she injures with her words), Bliss (looks familiar?), Liberty, Bimbo (she doesn't age well), James Bend, Faerie, and Gulk...
Hehe!
Posted by Mart at 1:04 PM No comments:

Been busy working on a li'l Torchwood something for my day job, a web-comic for Watch TV. I did one of these a year or so ago, and blimey it was hard work and almost killed the artist. He had 2 weeks to do about 40 panels. Doesn't sound like a lot, but it is!!
For this one, I decided to use Oli Smith as writer and Brian Williamson on art, plus my old mucker John Workman as letterer.
It wasn't too painful to put together - synopsis needed a little tweaking but was fairly straight-forward, and Brian put the art together verrry quickly! Good job!
Here it is
http://cde.cerosmedia.com/1Y4b728e0213aaf485.cde
Now working on a Ianto strip by Gareth David-Lloyd with art by Pia Guerra! (Swoons)
Posted by Mart at 3:59 AM No comments: