I almost completely missed this very cool review of Spandex 3 here, by Sir Rol Hirst, creator of Pjang and many other excellent comics: http://rolhirst.co.uk/
Rol calls issue 3, "an emotional action horror rollercoaster that deals quite wonderfully with the thorny subject of depression, and how we handle it" The review is halfway down here:
http://rolhirst.blogspot.com/2010/11/read-these-comics-now.html
My fave review so far, thanks Rol!
Posted by Mart at 8:26 AM 1 comment:

There's a lovely review of Spandex 3 here, by Kelvin Green.
http://www.comicsbulletin.com/reviews/12914878177694.htm
Kelvin has been reviewing my comics since the O Men days, and I always look forward to hearing what he says about them. I think we are on a similar wavelength, so if he 'gets it', I know I've done something right. I think Kelvin was the guy who gave me the famous 10 out of 10 for O Men 24 in Comics International, which Dez Skinn reduced to a 9.
Kelvin doesn't mince his words though, and he will criticise things where criticism is due. His latest one points out problems with my hand-drawing and perspective.
I've always known these things are problems for me (and feet!) and I hope I've improved a bit over the years, but also, for me, my 'policy' is that the story is the most important thing, and the drawing has a style, and I hope the readers just 'goes with the flow'.
But one thing that the review has made me do is actually make a conscious decision to study drawing hands (and feet!) because, for some reason, it's something I've never done - so maybe it's time to sort out where I'm going wrong.
(Incidentally, I am seethingly jealous of the way Jaime Hernandez draws hands. How does he do it?? Is there nothing the guy can't draw??)
Posted by Mart at 7:19 AM 7 comments: 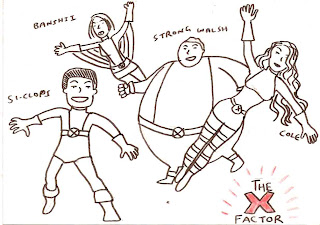 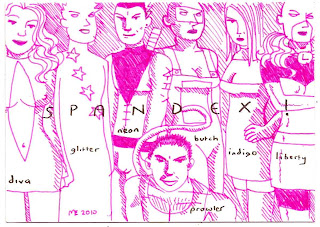 There's a really cool exhibition on at the moment in Orbital Comics - Caped Crusaid, which is a bunch of postcards drawn by various comic artists and celebrities. It's highly recommended and you can check out the cards here:
http://shop.ebay.co.uk/capedcrusaid/m.html
You can bid to own them!
I contributed two, although no one ever bids on mine :-(
You can see mine above!
Posted by Mart at 7:14 AM No comments:

No Love and Rockets 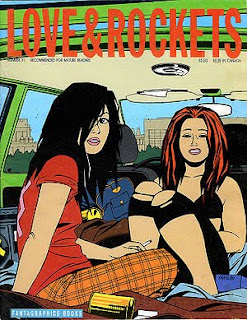 All I'm reading at the moment is Love and Rockets! My concentration span at the moment, doesn't seem to allow me to read novels (I've got a lot on my mind!), so I'm now just reading graphic novels - and that includes the entire run of Love and Rockets. I'm kind of reading them in a funny order - I'm reading the original Volume One books (the bigger versions), plus the various Volume Two series simultaneously (mainly because the start of the Vol 1 stories are quite hard-going in places).
However, there is a snag. I don't have all the Volume 2 stuff, and I got excited when I saw you could order them direct from the publishers, Fantagraphics. I didn't even think of just heading into town to see if Gosh/Orbital had them, I just ordered them immediately (they were doing a good deal). That was 3 October... It should have taken two to three weeks... I'm still waiting!
The thing is, I ordered them, and then a week later I got a round-robin email from them saying any comics ordered between 8 October and 20 October would be delayed because of stock management. But it's okay, cos I ordered the comics before then? No, of course not, as they explained to me when I double checked a couple of weeks later...
So then I checked mid-November to see when they were sent out - vague response - 'it went out last week'.
Checked again start of December - 'it went out last week'! So which week did it go out then??
So I'm basically regretting ordering them and I think their customer service sucks somewhat - not very helpful, slow and slightly sarky too.
And the kicker is, I was in Orbital on Saturday and saw they had a complete run of Love and Rockets Volume 2 - including the ones I'm missing. Well fuck it, I want to read it, not having them is spoiling my experience, so I bought them lol (and I managed to buy one I'd alrady got d'oh). (I was very excited that Orbital had Whoa Nellie 2, which is an issue that even Fantagraphics didn't have)
So now I'm just missing issue 1 and the final 2 issues of Luba's Comics and Stories - so who knows, maybe the package will turn up this year so I can read them??
And the final kicker is, I was reading Love and Rockets volume 2, issue 13, and there's a big printing error - 3 4-page sections are repeated, so I think I'm missing bits of the story. Darn.
Mind you, my Book Two of volume 1 has about 20 pages missing - I only discovered that when re-reading it! No wonder it never made sense...

(The funny thing is, some comic fans might actually find this interesting - wheraes I probably lost the non-comic fans at 'hello'.)
Posted by Mart at 6:55 AM No comments: