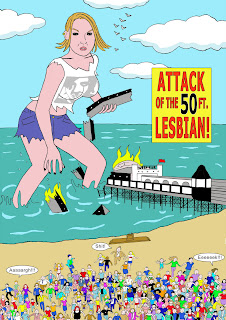 i thought I'd repost this... It's the finished (?) version of a page I previewed a few days ago. Blimey, that was a lot of work. I still need to polish it a little bit, but here it is.
(I have done some calculations - I reckon 13 pages are pretty much done - with the rest of the 23 in good shape (except one, that I haven't started yet). And I still need to do my lottery funding proposal (again), plus Spandex issue 1 has 8 pages of extras... So I started this before Christmas... And prob won't finish til at least May/June...
Very time-consuming!!! But hopefully worth it.
I'm off for a lie down.
Posted by Mart at 10:02 AM 6 comments:

I wouldn't say i'm a 'name-dropper' but I can't really write this post without name-dropping! brace yourselves lol...
well as you know, i edited a comic strip written by John Barrowman and his lovely sister Carole for the Torchwood Magazine recently (my day job), and during that time I also worked with legendary letterer John Workman (he works a lot with Walt Simonson and also lettered Grant Morrison's Doom Patrol run). John and I have been chatting a lot, and he's a really cool chap with lots of anecdotes.
Anyway, to cut a long name-dropping story short, John, out of nowhere, offered to create a Spandex logo for me and he was good to his word and created what you can see here (well I coloured it in). Am still experimenting with it, different colours, different ideas, but here's a first look anyway...
Posted by Mart at 9:57 AM 4 comments: 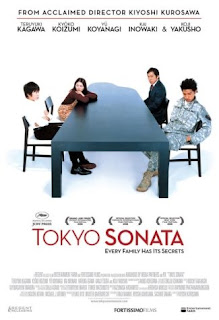 As you may know, I like Japanese horror movies – and my favourite is Pulse. I don’t think it’s a popular movie, it’s slow and doesn’t make much sense, but I like it because it’s creepy and atmospheric and quite melancholy, and has a lot of memorable scenes in it.
The director, Kiyoshi Kurosawa, has a new, ‘normal’ movie out, Tokyo Sonata, which I finally got round to seeing last night. Wow… What a beautiful movie. I had heard it is slow, and my attention span is non-existent at the best of times (how I struggled during Milk!), but I wasn’t bored for a single minute.
Tokyo Sonata follows the story of a normal Japanese family. The father is made redundant and tries to hide it from his family, trying to cling onto the last shreds of his dignity. The youngest son is a free spirit trying to find his path in life. Eventually he finds it, despite his father’s best efforts to ruin it. The oldest son (quite weakly drawn) is also searching for meaning in his life, and thinks he finds it by joining the US army, much to the horror of his parents. And then there’s the mother, devoted housewife, doing such an amazing job, but not realizing how badly her thankless life has affected her.
It’s a devastatingly powerful film. The characters are wonderful, and you just want to reach inside the movie and hug them or give them a good shake. The father’s story is very powerful and actually shifts very fluidly from comedy to sadness to hope. You really root for the poor guy, however frustrating his behaviour can be. There’s a bizarre little twist in the middle, which sometimes threatens to get too over the top, but somehow doesn’t.
And there are three beautifully realized moments which radiate pure emotion and really pull at the heart strings. There’s the ending, which I won’t spoil here. There’s the moment when you realize that the parents have become dead inside, because they’ve been fighting so hard to keep their family going and to keep their kids happy – not aware, til now, that their kids don’t really need their help to achieve their goals. So what was the point…?
And there’s the moment where the mother, shattered and emotionally dying, exhausted by everyday life, lies on the sofa. The husband comes home and she doesn’t have the energy to get up. She puts her arms in the air to get help in getting up, but doesn’t realize her husband has just gone straight upstairs. She keeps her arms in the air for a while. “Lift me up,” she says. “Can somebody please lift me up.” I think we all need that from time to time.
The film is quite open-ended, and I could happily have watched 3 more hours of it, but you feel – and hope – that things are looking up for the family.
Posted by Mart at 1:28 AM No comments: 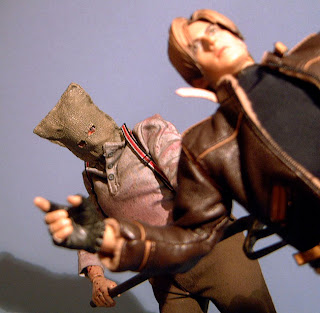 Blogs are often a place to ‘vent’ frustrations, or get opinions off your chest.
I’ve kind of tried to stop doing that here, and focus more on talking about Spandex etc, but I have to vent about...Resident Evil 5!
I’ve always had a soft spot for Res Evil games, right back to when my old flatmate recommended RE2 ages ago. I remember playing RE2 and killing all the zombies in the police station (mind you, it took me bloody ages to actually get to the police station) and then not having a fecking clue what to do next. Obviously, you have to take the jewel from that fireplace and insert it into the fountain to carry on. Obviously. Thank god for walk-throughs. These games have such a strange logic to them... You kind of feel stupid for not realising what to do, but happy that you didn’t.
The franchise has kind of meandered along for a while – Codename Veronica wasn’t all that exciting – and then RE4 came along.... Jeeeezus. This game is meaty – so long. And the zombies are TERRIFYING. First up, you’ve got these European villager zombies, who just SCREAM at you ‘haarrr blaahhhh gahhh!’ Then halfway thru, you get the zombie monks who just CHANT at you - ‘urrrmmm baaaa ruummmm’. Aaaargh! And let’s not mention the fucking terrifying chainsaw guy who pops up now and again and is utterly unstoppable.
Such a good game.
So now we have RE5. And I actually bought an Xbox just so I could play it – so it had to be good! But I gotta say, I’m disappointed! The graphics are amazing – we’ve come a long way from RE1 – it’s like you’re in a movie. But the zombies in this one – well, they’re just black people. I don’t really get it – why’s that so scary...? European villagers, yes. Zombie monks, yes. Black zombies. Er, okay.
Maybe it’s my own fault for playing the game on ‘easy’, but it is ridiculously easy, and I feel like I’m ‘wasting’ the set pieces by the fact that I’m zooming thru them.
Oh and let’s not forget Sheba, my useless companion throughout the game. When I’m running out of ammo, she’s there to...just stand there and let me die. While I’m off being a hero, she’s holding the fort, getting killed, thereby ending the game. I was distracted by something else the other day and left my RE5 just sitting there – and if you don’t do anything for a minute, Sheba goes ‘heeeey what’s up’ and other buddy-ish comments. What’s up? You let me die and just stood there even though you had loads of ammo, you stupid cow.
I guess the game is getting better towards the end, now that I’m in this cool complex (all Res Evil games end up in cool complexes). But there’s nothing to beat the horrible ‘plagas’ in RE4, or the huge trolls (we do get one, but just the one – thank god). Even the spiders are actually cute in this game – they were horrible in 4. And one new villain who is quite scary – a strange zombie who turns into a cross between a testicle and a venus fly trap – but he only turns up right towards the end.
So yeah, RE5 is good, but not amazing...
Posted by Mart at 7:37 AM No comments: 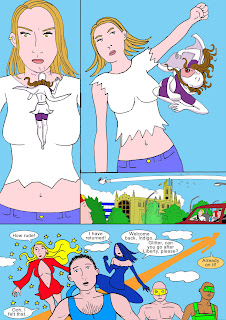 Just thought I'd drop in for an update.
Man, this is a lot of work!!! I am really making an effort with Spandex 1... I never normally redraw panels, but i'm doing a lot of redrawing... Just want to get it right. Plus there are the times when a document goes corrupt/damaged for some reason, and I have to try to salvage it.
Like this weekend - see panel 3? This has been my work for this weekend - drawing that at a large size and then dropping it into here. I also redrew the giant lady in panel 2, as I wasn't keen on the original. And still, I need to add more details - backgrounds, clouds, other stuff...
I'd say I'm maybe halfway there with it - maybe a little bit more...
Am also applying for lottery funding - my first application was turned down because I didn't fill out the forms correctly lol. I spoke to a lady there however, and it seems promising. We'll see.
So yes, really working hard, but I hope it'll be all worth it...And I hope no one else comes up with this idea before I get this printed!!!
Posted by Mart at 1:40 PM 2 comments: