A new redhead in my life 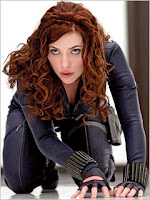 I've always had a bit of a taste for redheads - i don't know why. Maybe i was one in a previous life.
Tori...
Ragged Robin...
Damian Hellstorm...
Hellcat...
Er, probably loads more. As King Mob once said, 'maybe i am just drawn to the devil's daughter'.
And now there is a new one!!!
Yes, just when I thought it was safe to continue to be unexcited by Iron Man 2, a few new promo images turn up and.... Scarlet Johannsen as Black Widow woohoo! She looks great!!!! She looks Russian!!

I have a strange 'relationship' with Scarlett (advance apologies for probably spelling her name wrong throughout this). I first noticed her in Ghost World (maybe that was her first film?) and i quite liked her quirky, laidback style. She was even more laidback in Lost in Translation, almost comatose, but what a great movie, and she was perfect for it. It's a movie that didn't really do much for me initially - well apart from inspiring a rampant desire to visit Japan, which is why I'm now on my 4th term of learning Japanese - ... but then I rewatched the movie last week and it bowled me over (I want to avoid the term 'blew me away' as it's so over-used).
It's weird how she's coma-ed her way into so many movies - unlike her Ghost World castmate, Thora Birch. Even her terrible English accent in The Prestige couldn't turn me off my Scarlet.

I forgot all about these little intros!
Here's one of my favourites - Prowler.
He took ages to develop and get right, but I knew the basics and felt he always had to be on the team.
He basically has the power to absorb the talents/powers/skills of any gay person in the vicinity... So that means he can borrow his team-mates'/enemies' powers or even just cook a fabulous 3 course meal...
Originally he was just a bouncy fella with a tail, maybe Indian, but eventually I settled on making him half-Latino with those rather unique powers.
His name took ages, and i went thru loads - Unity, Origin, Amalgam - before settling on Prowler, which just happens to be a famous gay shop (please don't sue, please don't sue...). The pic here actually shows his early name, Unity.
I enjoy drawing Prowler because I think he has cool hair. It's spikey and i just go all sketchy on it, and somehow it comes out looking quite unique.
I based this picture on a photo of Chinese artist Benjamin, you may have seen it already somewhere else.
Posted by Mart at 2:47 PM 2 comments: 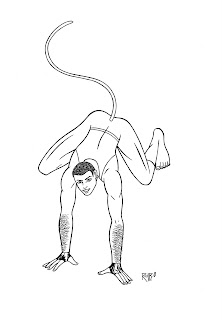 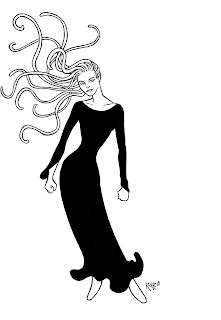 Some luvverly pics of Grace and Prowler by my chum Rich Bernatovech, who is doing a 'sketch a day' thingy, which I'm really enjoying. I love it when people do drawings of my characters!
Thanks Rich, and do check out his projects here:
http://drumfishproductions.blogspot.com/2009/07/sketch-day-116-grace-and-sketch-day-117.html
Posted by Mart at 1:00 PM 1 comment: 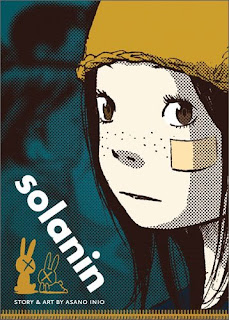 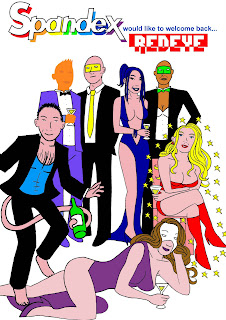 A quick update before I leave... I'm off to Italy for a week - my first holiday for 2 years!

Spandex: I'm sooo tantalisingly close to finishing it! So many endless tweaks to do though... Plus after lots of um-ing and ah-ing, I decided to add in a Mr Muscles back-up strip, so I'm only halfway thru that.
And I'm just trying to secure some funding so I can print it... (40 pages full colour ain't cheap!). Going back and forth with a very helpful guy at the arts council.
So yeah, almost there, and I'm kinda sad I won't be able to work on it on my week off (I can't take my computer with me but I will be taking some paper so I can work on the next couple of issues - but not too much!).

O Men: I'm thinking of serialising it on Facebook... A page a day. I've actually already scanned about 300 pages of it, to put it up on one of the many publishing sites - so we'll see. Not sure if a page on Facebook will be legible though.
Speaking of O Men, I went to a 'gay comics night' at Foyles bookshop on Wednesday (part of Pride 2009). It was chaired by the ever-enthusiastic Paul Gravett, and featured my chum Sina Shamsavari who does this http://www.boycrazyboy.com/, a guy called Howard who does this http://www.cutebutsad.co.uk/, david shenton who does this http://www.davidshenton.com/, the lovely kate charlesworth (http://www.katecharlesworth.com/) and Rachel House (can't find a link for her). Jeremy Dennis was supposed to go, but 'got stuck in traffic'/couldn't be arsed. She does the amazing Whores of Mensa, which Mensa have now ordered to be pulped and name-changed, stupid people...
Annnnyway, it was a funny old night. Despite 100 people on Facebook saying they were 'definitely going', only about 15 people were in the audience. It was fun enough but i didn't really get a sense of what the guys did.....
Paul Gravett spotted me in the audience (not difficult), and asked me to talk about my O Men/Spandex/how my own life affects my comics. Well... I got over excited and rambled and rambled... and said how once I named a character's baby after a partner, and then that partner dumped me... So I had the baby killed... Shocked faces and silence in the room...

A quick word on what I've been reading...
Well for the past two months I've had a bit of bedtime pleasure. No, not like that, silly! I've been reading bits of two huuuge books every night.
1 - Drifting Life by Yoshihiro Tatsumi. It's huge! Like 900 pages. It's a strange old book, telling the life of Tatsumi and the birth of Manga. That makes it kinda sound more interesting than it actually is - because most of it consists of Tatsumi sending off comic pages to publishers and then getting a reply - over and over again. I didn't actually learn anything, to be honest. It's strangely addictive, but not an essential read, and i think the usually meticulous translator/letterer/editor Adrian Tomine probably got bored too, as there are a couple of typos... I'm sure it'll get praised by critics everywhere, but i say 'pish'.

2 - Essential Dykes to Watch Out For by Alison Bechdel. Huuuge at 400 pages, this book covers over 10 years of her short strip serial (not all of the strips, but most, and you don't really notice anything is missing). It's incredible to see how Bechdel's art evolves - from scratchy to polished... At the start I actually preferred her scratchy more basic style (a bit like how I love Schultz's early Peanuts art) but the polished work soon won me over.
It's a strange old strip - certainly not perfect - jeeeeesus, the amount of politics in it is overwhelming! You get whole strips where a news-reader's ramblings run concurrent to the story (so you can skip the boring political stuff). And after struggling to get into it initially, it's amazing the power it has - you really want to know what happens to the characters. Will Ginger have an affair, what's Harriet up to, will Clarice move house... A real page-turner.

And finally, an opinion... I love tennis/Wimbledon, but my goodness, Murray bores me to tears! No charisma!!! No drama... I miss the agony of Henman matches! I was initially gutted that i was gonna be missing the Wimbledon final, but now I'm not really that bothered.

Oh a plug - http://drumfishproductions.blogspot.com/ my chum Rich is drawing a superhero a day, getting himself in practice to do a regular webcomic. Cool stuff!

Anyway, I'll leave you now - speak soon. You wait a month or so for a blog update and then several million words come along at once.
I'll leave you with a pic from Spandex which I did for Barry Renshaw's relaunch of RedEye Magazine (i dunno if he'll use it or not!) http://www.enginecomics.co.uk/redeye/reframeset.htm