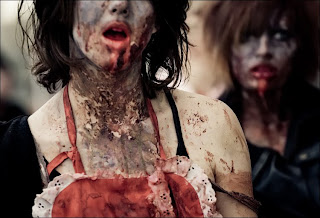 Wooo I was lucky enough to see the first episode of the Walking Dead last night.
I had a few initial reservations - the slowness of it, not being convinced about Andrew Lincoln, and not being able to understand a single word the Shane actor was saying - but it definitely won me over. The ending was just genius, a fantastic, cheeky, unique final five minutes.
It was actually quite a strange experience for me, having read the comic from the start. I knew a lot of what was going to happen, but there are some nice surprises along the way too - some neat additional moments.
Just a few small reservations.
First up, I sooo wish it had been in black and white. Some of the scenes don't really leap out, and making it black and white might have given it a touch of class. I wonder if it was considered by the producers at some point? Ah well, i can always adjust my colour lol.
(Minor spoiler in this paragraph) I loved the little subplot about Rick's neighbour's wife being a zombie (even though her goldfish impression was a bit weird). However, at one point, we see the zombie wife try to come home.... Nooo - that's not right! Zombies don't have any kind of memory, do they? I don't think that has been explored in the comic at all.
I'm dying to see Glenn and Andrea - they'll probably turn up in episode 2. Glenn makes a kind-of appearance in the first episode, and this is what actually concerns me. On the one hand, he sounds fun and cocky, but on the other hand, what if he becomes irritating - or what if we start to hate Lori? This is one of the things about Walking Dead, the comic - as unique as it is, it's very much all about Rick, and as likeable as some of the other characters are, they aren't very fleshed out. Everyone else in the comic seems to be a B-character. So what if the TV show fleshes them out too much, or the actors evolve them in a different direction?
On that note - how different will it become? I'm sure they'll keep certain key plotpoints, like the prison and the Governor, but I'm sure it'll evolve in different directions. And actually, that's probably for the best, because the comic has really gone off the boil since they left the prison.
All in all, I'm looking forward to seeing more, and can't wait to see what they do with it all.
And in a way, I almost wish I'd never read it, so I could buy that awesome compendium which collects the first 48 issues - amazing!
Posted by Mart at 3:55 AM 1 comment: 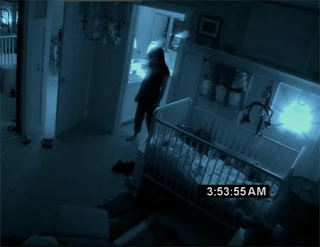 Last year I watched Paranormal Activity with my good chum Marcus at his gaff, and it scared the bloody life out of me. I was hiding behind about 6 pillows. We watched a download with a different ending to the official one (the one where the police come into the house). Still, I enjoyed it and was hoping to repeat the experience this year. However, we couldn't find a decent download so we had to go to the cinema - shit!!! I was bricking myself.
Well, to be honest, it wasn't too bad. It's one of those films where you expect things will happen and they don't - so a second viewing wouldn't be scary at all. It takes an absolute age to get going, and one of the most annoying things is how they repeat most of the scares from the first film. Except they overdo it a bit, and it just gets really silly. There is one new 'scare' (spoiler: wifey sitting in the kitchen and then suddenly all the cupboard doors crash open at once), but I think it would have been so much more effective in silence.
Another problem is that this film is kind of a prequel to the first. I'm not a huge fan of prequels - I'd rather see where a story goes - but it is quite clever.
However, the film does still has a very creepy edge to it - the transformation of the wife is unsettling - and it's still fairly effective. Put it this way, I didn't sleep very well last night!!!
Posted by Mart at 3:54 AM 1 comment: 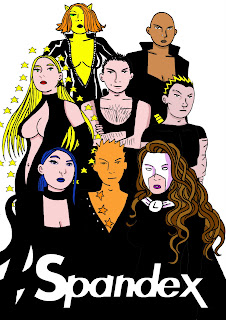 I went to BICS (Birmingham con) last weekend, and it was cool - met some lovely people. Didn't do an amazing amount sales-wise, but maybe people are put off by the theme of the comic - let's face it, a straight guy may not think a comic about gay superheroes is for him - but I hope over time to show that it is a really accessible comic. I will not be defeated! (And also, I have some great ideas on how to make my stand more exciting - no, not involving me dressing up).
One other thing that occurred to me, was that maybe the format is putting people off. I do love my dinky little a5 comic, but maybe people just want US-size. But alas, I checked with my printer, and going US-size (36 pages, full colour) would cost me £2.80 a copy (and that's at a cheap printers - Lulu would probably cost 6 quid per copy), which makes it undoable (considering places like FP take a 50% cut, so I'd have to charge over a fiver to break even!). So sadly it's not do-able, but I definitely have some plans on how to make issue 3 look great.
In other news, I'm doing three cons in November! There's the Comiket on Sunday 7 November (although I'll have to leave early to go to my Sensei's Soprano concert), the Thought Bubble in Leeds on 20 November, and a Showmasters thingy in the last weekend of November in Olympia. I want to get Spandex 3 ready for Thought Bubble, and I found out that it's a week earlier than I thought - disaster! - so I've lost a week on my Spandex 3 deadline d'oh. Working frantically on it now.
And in final news, next Friday I'm going to the Eagle Awards winner announcement ceremony/dinner where I'll find out if Spandex has won the award for Best British Comic! I'm not holding my breath, but I'm definitely crossing my fingers!!
Posted by Mart at 3:52 AM 1 comment: 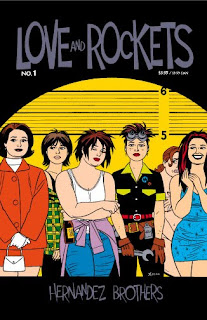 I'm still thoroughly loving reading my old Love and Rockets books. I'm reading the classic old books, but also the volume 2 spin-offs at the same time. I'm just waiting for Fantagraphics to send the issues I'm missing and then I'm all set - I'll have everything except for Woah Nellie 2.
The vol 2 stuff just didn't work for me on original release - I completely lost track of what was going on - but it's all good now, and I'm really enjoying it. I'm looking forward to getting through the early L+R books, as they are a bit ropey, and there's some great stuff ahead. In fact, I noticed that there are about 20 pages missing from my Fantagraphics book two - no wonder it didn't make much sense to me the first time round lol.
But really, it's amazing stuff. Jaimes' art is sumptuous and Gilbert's storytelling is second to none - the pacing is addictive, like a drug!
Loving it.
Posted by Mart at 3:51 AM No comments: 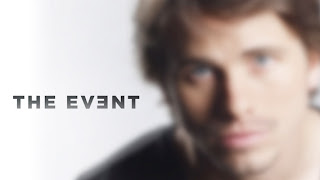 What do you get if you cross 24, Lost, The X-Files and pretty much every single other US sci-fi/drama show you can think of? The Event...
Did they run out of ideas or something?
And what with most US shows getting cancelled before they get a chance to hit their stride and what with the utter letdown of Lost, does anyone have faith in this new, depressingly by-the-numbers seen-it-all-before show?
Posted by Mart at 3:50 AM No comments: 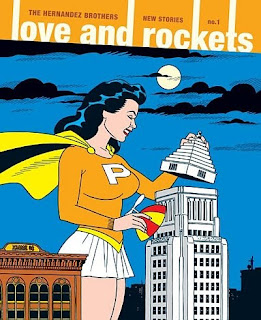 I have a funny old history with Love and Rockets. I came to it quite late, reading old graphic novels from Titan. It takes a while until the artists/writers find their feet, but once they get there – wowsers. Some of the middle stories from the first volume are stunning and near the end it has a huge impact, really pushing the boundaries of storytelling.
Jaime has got to be one of my all-time favourite artists. Every panel looks like it’s come straight from a life-drawing class – each character just moves in a realistic way. Gilbert is a bit more cartoony, but has an appealing style and he’s a great storyteller – although a bit surreal sometimes.
After volume one of L&R, the Hernandez brothers created some spin-off series and one-shots, and occasionally it felt a bit monotonous – it was all extremely well told, but maybe due to the frequency of the comic, it was easy to lose track of what was going on. I definitely lost track of which of Luba’s young relatives was a lesbian, they seemed to all be coming out left right and centre!
Overall, I felt like the guys needed to do something new...
Then, the brothers began an annual Love and Rockets comic. It's kind of a good idea, pooling the work into one annual book - such a shame it's not in colour. The first couple of issues didn’t really wow me, to be honest. Gilbert got even more surreal, and Jaime kind-of went off in a tangent, telling tales about superhero versions of characters.
And then the latest L&R book came along, issue three. Blimey. It just shows the strength of both brothers. Gilbert’s story is kind of surreal, but clever and a great read. And Jaime. Wow. I don’t even know where to start.
Jaime goes back to telling a more normal story about Maggie, and the volume kicks off with a tale about her going on a date with old flame Ray. Then later in the book, we get Browntown, a centre-piece focusing on young Maggie and her siblings. It’s a real shocker, very strong. It shows what happens to her young brother (who has never appeared in the series before) when he comes into contact with some of the local boys. It’s a really brave story and I’ve never read anything like it. It just shows how we’ve all done weird things as kids – but this takes it to the extreme. Congrats to Jaime for having the courage to tell it.
And it doesn’t end there. There’s one final story – told in the present day – and the final-page revelation is jaw-dropping and very clever indeed.
Very rare these days to get a comic that makes you want to re-read the entire series – which is exactly what I’m doing! I think I will probably enjoy those middle spin-off comics a lot more now!
(The cover above is from issue 1 - gorgeous eh? But if you wanna check it out, try the new issue 3)
Posted by Mart at 10:59 AM No comments:

I'm gonna talk about a really good comic in a minute...
But first, I want to mention a fairly bad one...
What the hell happened to Powers? It was so good at Image, and ever since it's been at Icon/Marvel it's been so lacklustre.
I just bought issue 6 last week, and I think it will probably be my last 'floppy'. I'll shift to trades now - if I can be bothered with Powers!!
Another bad point - jeez, the self-promotion and egotism on show in the letters section of Powers! Look at this amazing interview with me! Look at this incredible feature about my stunning new comic Scarlet! Look at how amazing I am!!! Jeez! I used to like the Powers letters section mainly for the 'No LIfe' section (fun to read Bendis' recommendations) but I think enough is enough...
It did make me laugh though, when Bendis sought sympathy and thanked all the people who'd defended his current shit work on the Avengers - tee hee! Mr BMB, it's really not good...
Posted by Mart at 10:55 AM No comments: