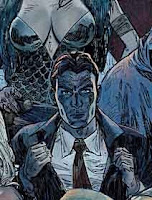 Who is this!!!
No, not the big boobs - this guy on the group shot cover of Dark Reign (which is quite a nice little comic).
You see, obviously you’d think it’s Norman Osbourne, because he’s part of the cast in the comic. But it doesn’t look like Norman! That’s not Norm’s hair!
I really thought it was the Purple Man - and I thought I had rumbled Marvel - because we still don’t’ know the identity of Norm’s mysterious unseen friend who’s keeping the other Dark Reigners in check. I thought they'd unintentionally revealed him on the cover...
But nah, I think I’m just being too clever for my own good. It’s prob Norm. Which means that his mysterious friend is prob someone like Mephisto…or Scarlet Witch…
Damn you, Bendis!
Posted by Mart at 11:13 AM 4 comments:

Why did no one tell me how good Ladyhawke are (is)???
I’ve been trying to cut down on music-buying - following a couple of recent months where I found out I’d spent more money on music than I did on essentials from Sainsburys… And I don’t like downloading illegally…
I was doing really well this month - just got the new Killers album - which is really good, so much better than their last proper effort, Sam’s Town.
It all went horribly wrong this weekend though - all thanks to Marsha on XFM lol! So yes, I got myself the aforementioned Ladyhawke (check them out if you haven’t heard of her/them - kind of a pop-rock Ting Tings), and I got Lykke Li (nice and quirky) and the new Cat Powers EP (altho she turns Who Knows Where the Time Goes - one of my fave songs - into a tuneless dirge).
And then it went even more wrong when I bought the new Beyonce album. I can’t stand R and B or those female warblers who do their scales in the middle of their songs, but she was so amazing on X-Factor, I think I finally ‘got’ her. And the album isn’t so bad - she says it was influenced by Coldplay, so it could be worse…
So anyway, no more album-buying til 2009...hopefully…
On a music-related note - I think my beautiful gorgeous video ipod is dying. It lasts for about a day of commuting and that’s it before the battery gets low. Ah well, I guess it’s almost 2 years old. I guess I’ll have to get a classic ipod. I quite fancy the ipod touch but it only holds 8000 songs or so - nowhere near as much as the 20000 that my beautiful gorgeous video ipod holds!
Posted by Mart at 11:08 AM No comments:

Comic Event of the Year 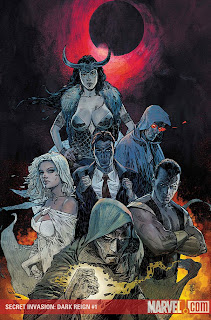 ...Or at least that's what Wizard Magazine calls it. Yes, the final part of Secret Invasion came out this week, and boy is it bad.
As much as I love Bendis and Yu, this series comes across quite limp sometimes, and this last part really has its shoddy moments - parts which seem like they belong more in a really bad small press comic than in a major event comic. It's so cack-handed.
One really really good moment is when the Skrull Queen (who looks like Spider Woman) approaches the good guys - her jaw broken - the art is amazing... And then she gets her head blown off by a small shaft of pink laser.
Now I've got two problems with this - first, there's the pink laser, then there's the fact that it's quite a small panel for a big moment - and finally, the shooter is Norman Osborne. Sigh, now then, what's all this about. Another completely evil bad guy somehow putting the blinkers on everyone in the world? And didn't Bendis expose him as the Green Goblin back in Pulse??
Other problems with this issue - the 'death' of Wasp - what happened there then? And as lovely as janet is, does anyone care enough that she's died, or care enough to want her to come back? And we've been robbed of a poignant moment too, when Hank is told that janet is dead - their relationship is so up and down, and i'm sure it's 'down' at the momenet anyway, so why should he care? in his editorial, joe quesada says 'how will hank pym deal with the loss of his beloved ex-wife'. i'm sure he'll cope fine...
Other probs this issue - wasn't Hawkeye girl almost dead last issue? And now she's fine apart from broken glasses? The return of Mockingbird - as much as I love Bobbi - who cares??? And she died in West Coast Avengers - there was no Skrull body or whatever - what a copout. If she's coming back to the Marvel U, I hope they're gonna cool her up - make her a good match for Ronin. And the dribble of Skrull imposter survivors who came out of that ship - is that it? And did you notice Sue Storm's incredibly fat arse at one point?
And finally, the new line-up of villains in the end - Emma Frost evil again? Sigh, this happened already in Astonishing X-Men, make yer minds up. Oh well, at least the new female Loki has cool evil boobs.
(Oh and Dark Reign sounds interesting - I hope Elektra is in the line-up)
Posted by Mart at 12:16 PM 5 comments: 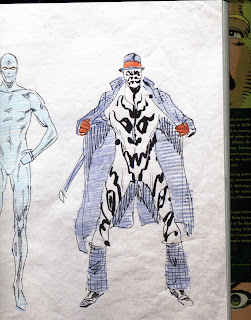 Check this out... The original design for Rorsharch from the Watchmen. Ouch!!!
Posted by Mart at 8:10 AM 4 comments: