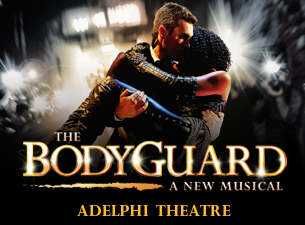 I'm not going to bang on about every film or musical I see, but I noticed there weren't many online reviews of The Bodyguard musical, so I thought I'd review it myself! (I saw it last night.)

I actually hadn't seen the original movie, so I decided to catch up on it the weekend before watching the musical. I wasn't that impressed by the movie, to be honest. I found Whitney's character a bit unengaging and unlikeable, and I couldn't see the point of not really playing any of the songs properly.
The musical is a brilliant idea. It solidifies the film and makes it work, and it's a great showcase for Whitney's best songs - all played in their entirety.
It's not a perfect musical by any means. A few quieter moments really drag, and you can hear the audience getting restless. The lead actress - Heather Hedley - never really engages with the audience and her acting and singing aren't quite pitch-perfect, so even when tragedy strikes, some of the audience members meanly sniggered! I mean, even slightly bitchy, stand-offish characters could make the audience like them - with a cheeky nod or wink - but our lady/the writing didn't go for this.
I tell you who *did* engage with the audience: the lady who played Whitney's sister (yes I know I'm mixing up the names here lol). A fantastic, soaring voice, beautiful lady - I'm pretty sure everyone in the audience wondered what it'd be like if the roles were cast differently.
I also found the main lady's vocal range to be occasionally too low for Whitney.
On the plus side, it's a great story, told well - and I loved the slo-mo stalker bits in one of the musical numbers - inspired.
But really, we all went to see I Will Always Love You, and wow, the main lady did not let us down. I criticised her voice in this musical - and yes, she did fudge/avoid certain notes - but I can't really fault her performance of Whitney's trademark song. Truly magnificent.
And it didn't end there! I guessed this would happen, but after the applause for the cast, there was an extra musical number - I Wanna Dance With Somebody. Everyone in the audience is still on their feet from the standing ovation, and now everyone starts dancing! It is *so* much fun, as each main actor comes on and really lets rip on the song (the old guy, the little kid - so cool), and there's even a bit of a feelgood factor, as dead/separated characters are reunited with the cast for the singalong!
I love musicals like this. You go in, not sure you're going to like it, but it really grabs you and hooks you in and presses all the right buttons. Even if this musical isn't quite perfect, there are moments - the finale in particular - that really make it completely worthwhile.